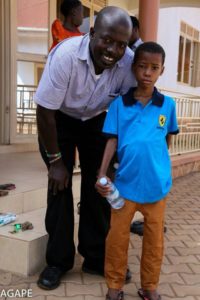 Joseph Roberts SSERWADDA
It was during Christmas week that I was placed under arrest and dragged into court. I was a very small boy, in my fourteenth year. I was caught in the act; there was no excuse; there was thrust into the prisoner’s dock. The gate was slammed, and a big policeman leaned on the gate, and seemed to look at me with a degree of satisfaction at the thought that he had me, and that I was sure of punishment. I felt utterly helpless. I could not even weep. I had wept all the tears out of my system. I was dry and emotionless, except I was crushed to the very earth with a sense of my guilt and lost ness. The judge sat in his big chair but I did not dare look at him. I had no hope for mercy, and I knew that justice would be my ruin. The courtroom was packed with people. As I crouched in the corner of the dock, they were gazing at me with looks of accusation which seemed to say, “Judge, give him the full benefit of the law and save society from further trouble.”

Represent….
Finally the clerk announced the opening of the court and my case came first. The judge asked the clerk if the boy had anyone to represent him. “Represent” was a new word to me. I supposed my representative was to be my executioner. The clerk answered that I had no one. The judge then said to a lawyer within the bar, “I appoint you to represent this boy.” The lawyer rose up and walked slowly forward, picking his way among the chairs, approached the dock, pushed the policeman to one side, opened the gate and stepped inside the dock. I, withered with fear, crouched closely in one corner, and with eyes side open with horror, gazed up at my lawyer. He had a wonderful face; it was strong and calm, full of kindness and marvelous beauty. I noticed a tear hanging on one eyelash. That tear helped me wonderfully. He sat down and slipped his arm around me. It seemed that my very bones had dropped out of their sockets and I was scarcely breathing below my collar button. My attorney drew me up to him. The pressure was so gentle, and yet so strong. It seemed to restore and readjust my bones, relax my nerves, and I commenced to breathe more deeply. Stooping down, his silken beard brushed over my suntanned face, and placing his lips close to my ear, he said, “My little friend, are you guilty?” I could not have lied to him if it had been to save my life. With trembling voice I answered, “Yes, sir, I am guilty of much, more than you know about.” “Well,” said he, “do you not think it will be best for us to confess judgment and throw you on the mercy of the court?” I did not know what it meant to be thrown on the mercy of the court, but I felt sure that if he would throw me I would alight in the best place there was for me, and I at once answered in the affirmative. My lawyer gave me a gentle pat on the head, and stood up facing the judge.

Heartfelt Confession
He said, “Please, your honor, it has been my privilege to practice for many years in your honor’s prerogative to show mercy. I thank the court for appointing me to plead in the interest of this little boy. He confesses his guilt. His heart is broken. He is full of contrition. He has been an orphan from his infancy and is dependent and moneyless and begs for compassion.” I reached out my soiled, lean fingers and caught hold of the skirt of my attorney’s coat. I clung to him with the feeling that if I would hold on to him he would pull me out. I thought his speech was finished but it was a mere introduction. A deep stillness fell upon the great gathering and his mellow voice rose until it filled the room with a most marvelous appeal. He spoke of orphan children, of their loneliness, of their unprotected condition, of the temptations to which they were subjected of their desolation- -like lambs without a shepherd, in a world full of hungry wolves seeking to destroy. He spoke until the harsh people softened, old men groaned aloud. He spoke until the tears trickled down the policeman’s check, who, looking kindly at me whispered to inquire if I did not want a drink of water. I was too busy clinging to the coat tail of my attorney, gazing into his wonderful face, and listening to his marvelous words, to want anything else. I was breathing deep.

New life and hope
New life and hope were creeping into me. I was falling desperately in love with my lawyer. My attorney said, “Please, your honor, if you in the spirit of mercy will dismiss the charge and set the lad free, I pledge myself to become his guardian, to see to it that he has a home and I promise to give to society a good and useful citizen. I could scarcely keep from crying aloud for joy. It seemed my heart would burst within me for gratitude. I felt that if they would let me place my ragged shoes on the bench upon which I sat, and throw my ragged coat sleeves around the neck of my attorney and kiss his cheek one time, they might take me out and hang me, and I would die shouting. In the midst of his wonderful address, my attorney, instead of addressing the judge as “Your Honor”, said, “My Father,” This shot through me.

– I saw that if the judge had appointed his own son to plead for me, it was more than likely that he would heed his pleadings and show me mercy. Men were weeping all over the courtroom. I had both hands full of the skirts of the coat of my lawyer. The policeman had laid aside his cap, had gotten out his handkerchief, and had buried his face in a flood of tears. It was a powerful moment in my trial. My attorney had reached his climax. He exclaimed, “My Father, this child for whom I plead is none other than my brother.”
-I saw at once that if the judge was the father of my attorney, and the attorney was my brother, then the judge was my father also. I could restrain myself no longer. I gave a great cry of joy, leaped out of the dock, rushed up to the judge’s stand and flung myself upon his bosom. He embraced me with a long, tender pressure that seemed to make me through and through a new creature. Folding me into his arms, he stood up and said, “Rejoice with me, for my son who was dead is alive, who was lost is found”. The entire crowd in the courtroom broke into tears and laughter. The people embraced each other. They all seemed to want to shake hands with me. They congratulated my attorney, and we laughed, and wept, and shouted together. I hardly need tell you that the courthouse was a Church, that the trial was an old-time revival, that the Word of God arrested me and brought me, convicted and guilty, to the bar of justice; and the eternal Father was the judge upon the throne, and that the Lord Jesus Christ was the Attorney who pleaded my case, won my pardon, and secured my eternal salvation. I look back with fondest memory to that great occasion when bowed and burdened with guilt and bound with sin, Jesus Christ undertook for me, broke my chains, swept away my guilt, and at the throne of the universe, secured for me a full and free forgiveness, a blessed and glorious pardon, and revealed the blessed fact that the great God —H.C. Morrison black.

Today “He is calling”
“Come now… saith the Lord; though your sins be as scarlet, they shall be as white as snow; though they be red lie crimson, they shall be as wool” (Isaiah 1:18). Today if you don’t have Jesus Christ as your Lord and the savior Of your life, invite Him into your life; call upon Him while He may be found. Say this Prayer with me” lord Jesus Christ come into my life, I have known that am a sinner, cleanse me with your blood you shed for me, wipe away my names from the book of death and write them in the book of life. Lord Jesus I denounce every evil act that has been in my life. Renew my strength, refresh my soul, and fill me with your spirit.